How can anyone resist the appeal of a bright globe filled with gumballs? Gumball vending machines are so fun and so successful at pulling people in that they have enjoyed an enduring popularity for over a century.

Vending machines that dispensed gum were first produced around 1871, but those machines were made for sticks of gum. The first machine made specifically to sell round balls of gum was introduced in 1907. The early machines already had the traditional form that we still recognize today: a glass globe above a metal base. The base was originally cast iron, often painted the familiar bright red, and designed to accept the one penny cost of a ball of gum.

In 1923 the Norris Manufacturing Company began to produce a gumball machine that could accommodate the inevitable price increase by accepting either pennies or nickels. The Norris machines were noted for their modern chrome bases. 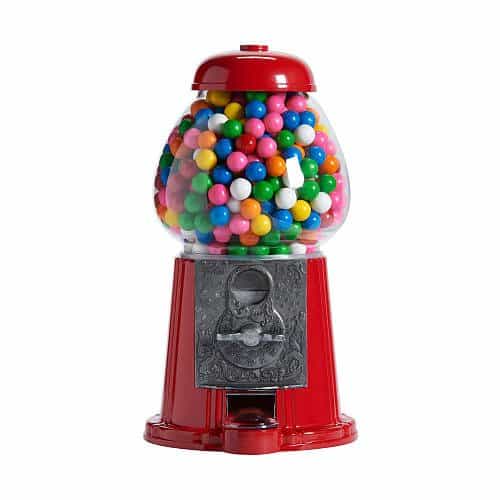 Bubble gum was invented in 1928 by Walter Diemer, an accountant who named his creation Dubble Bubble. It was only after World War II, however, that bubble gum was made in balls that could be dispensed from gumball machines.

Ford Mason was a game-changer in the industry. In 1934 he founded the Ford Gum and Machine Company and built his reputation on quality and service. He printed his name on every one of his gum balls to mark them as a superior product. During the Depression, when Mason needed an extra push to get people to buy his gum, he devised a plan to partner with local charitable organizations. He split the proceeds of his sales with groups such as the Lions Club and publicized these partnerships, giving the public an incentive to choose his machines over any others.

After World War II, more producers began to make their gumball machines with plastic domes and aluminum bases, although the traditional glass and iron machines are still available. The popularity of gumball dispensers is as strong as ever, and there is a large variety of machines for commercial and home use.

Gumball machines can be found everywhere from the local mechanic shop to the regional mall. A single dispenser on a stand is common in smaller businesses, but large carts that hold racks of machines are available for public spaces such as malls. Small gumball machines that sit on a table or have their own stand are popular novelties for homes. These can be set to dispense for free or to require coins.

New varieties of gumball machines are being created even today, which speaks for their ageless appeal. They are available in the shape of rockets or gas pumps or pinball machines. They range from a few inches to a few feet tall. There is an almost endless variety of flavors and colors and sizes of gumballs to choose from, including good old-fashioned pink Dubble Bubble.

The combination of nostalgic appeal, modern design and tasty flavors of gum seems to keep the gumball machine from falling out of fashion. It continues to be a fun, sought-after addition to businesses and homes.